I started this journey working as a teaching assistant at Rokesly Junior School. This role allowed me to interact with many children who have a love for sport and activities, football being one of the most popular.

I was fortunate that Kirt attended one of the sporting events and we spoke about my role at the school, my love for sport which led onto PPFC. Kirt invited me down to a PPFC session with the opportunity to volunteer and join the coaching team already in place. As I watched a training session I couldn’t help but be impressed with the organisation and overall setup of everything, I instantly wanted to be apart of PPFC.

I myself love football, playing, watching and coaching football is a very big part of my life. I have coached various levels and ages of children for 11+ years, attaining FA Level 1 & 2 football coaching badges along the way. I find everything about football interests me especially coaching children because as a coach I get to witness the development of individuals and them as a team when overcoming things they couldn’t do at the start. Being apart of the reason the children work hard, develop, meet new people and enjoy football drives me to want to coach.

I look forward to the future of PPFC, working with he talented children and also the hard working coaches and staff at PFFC, creating more successes as a team.

I got involved with PPFC when two of my kids joined. They have a great set up and are energetic and passionate about helping kids enjoy football.

John and Kirt dedicate a lot of their time for free for this cause and I wanted to help them as much as I could with the younger ones coming through. Our kids get a lot from this and its extremely reasonably priced!

Football has been an integral part of my life for as long as I can remember. I play it, watch it and talk about it at every opportunity. When Gascoigne is your surname, it’s hard to avoid it! My first experience of the club was when my son attended a drop-in session on a Sunday morning. I was struck by the organisation and energy of the coaches and, most importantly, my son absolutely loved it! He now plays every week for PPFC and his development under the guidance of the club is great to see. My daughter has recently joined the club too and is full of enthusiasm for the game, not least as a result of the engaging training sessions each Sunday.

So, when Kirt asked if I’d like to get involved I jumped at the chance. I’ve been assisting for the past season and am now an FA Level 1 coach. Football can be a fiercely competitive game, full of passion and pressure, which is why many of us love it so much.
However, if you ask the children at our club why they like football (as I did as part of my FA Level 1), their first answer is always the same – because it’s FUN!  That’s the ethos I aim to bring to coaching. I hope to help our players learn about the game, feel part of a team, improve their ability and to have the confidence to express themselves on the pitch. Ultimately it’s about the player’s enjoyment and continued development, both as footballers and as people.

PPFC became a regular fixture in Priory Park in the years I spent the majority of my waking hours in the playground there, trying to wear out my 3 toddlers! I was instantly struck with what a nurturing and inclusive club it appeared to be and knew that, as soon as my toddlers reached the right age, I’d sign them up, which I duly did. After a couple of years as a spectator Dad, and after the club moved to Albert Rec, I joined the coaching team to help Kirt and John open the doors to more kids of all ages.

I have loved being a part of PPFC. It’s a great club, committed to providing a safe, fun and stimulating environment for kids to exercise and develop their footballing and social skills. And the family feel amongst the players, the coaches and the support team makes it just that little bit more special. Knowing how much the players look forward to Sunday mornings, and how much I do too, makes it all worthwhile.

As a Spurs fan, my only complaint would be the choice of red as the primary club colour. But with Kirt, a massive Arsenal fan and John, a committed United man, founding and running the show, what chance did we have?

They say those that can’t do, teach… Yet, all the coaches at PPFC still play footy for fun and then some! It’s that passion for the beautiful game and its ability to bring us all together – the world over – that is deep in the DNA of the club. Watching my son develop his skills, make new friends and have a blast each week, whatever the weather, has been a revelation. It’s why I relished the opportunity to do my FA Level 1 coach training and become part of a team that aims to give boys and girls in our community the chance to build their confidence through teamwork, be creative with their skills on the pitch and have a lot of fun.

I’m really looking forward to working with Kirt and the coaches building a new U-9 team for next season and believe my energy, enthusiasm and love for the game will inspire them to be the best they can be and keep coming back each week. “Who are we? Priory Park FC!”

My 2 sons and I were very warmly welcomed to the club by Kirt and Dan, then Head Coach of the Under 10s. I had some time out from work and decided to take my FA Level 1 Coaching Badge which was one of those things I’d always fancied doing but never got around to. I’ve been able to put it to good use with a terrific group of coaches and players.

My boys had played for different clubs but none that’s as truly ‘grass roots’ as Priory Park FC as evidenced through winning The FA Grass Roots Club of the year for 2019.

The club’s ethos and team spirit is unique at PPFC. 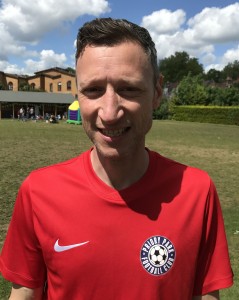 As a kid I loved playing all sports – I’d try anything. I loved learning the skills and the competition. It helped my self confidence and social skills.

Football has always been a huge part of my life. I played through all the age groups into Uni. Football, more than most sports, is so global. If you have the ability to play and talk about the game it can be a real common ground in all sorts of situations.

Now I’ve got two boys, 10 and 6, and both play. I started taking my oldest son down to the park with a bunch of his mates every week. It was great to see their progression – from chasing the ball and not wanting to pass to an understanding of passing and moving, holding positions and working good team goals.

My son now plays for PPFC and when Kirt asked if I’d help out, it seemed the perfect way to make ‘coaching’ more formal.

I first noticed Priory Park Football Club, as many people do, when walking through the park last summer. Being a father of two grown up footballers, as well as a teacher and FA Level 2 coach  I think I have a pretty good idea about what constitutes high quality football coaching. Watching the Sunday morning training at Priory Park FC,  I was struck by the enthusiasm of the coaches and the expectations of self-discipline sportsmanship instilled in the players, as well as the good standard of organisation of the club. So in September 2016 I signed my two youngest children up and agreed to help support the coaching of the u7s.  Having dusted off my old coaching manuals I am looking forward to next season when I will be leading the coaching of this group.

I was introduced to PPFC by my teacher at City & Islington college where I study. We got talking about football as her son plays at PPFC, and I was telling her a little of my background in West Africa.

I was a first division player in Senegal and have always wanted to continue with football, whether playing or coaching. I have coached 9/10 year olds back in The Gambia and I am very happy to have the chance to pick up the coaching challenge again. I find everyone at PPFC, both coaches and all the kids very friendly. Saidou has recently completed his FA Level 1 badge.